How To Help Your Child Learn

Are you interested in helping your child learn?  Does it break your heart to see them struggling?  Please allow me to tell you a true story that will help your child learn.

It was in the 70’s when I was given my first group of children that had not learned to read with the traditional method of teaching (One size fits all that has only increased with government’s Central Planning/ Government mandated curriculum and testing). That group of 8 were all first graders from the same class.  They were given to me shortly after Christmas, and the teacher had decided that they were going to fail.  This decision is traditionally made by that time of year, because it allows teachers to prepare the other children for the year end test, which allows them to graduate. She (the teacher) told me that I was to help these children learn to read. She continued to work with them on every subject except reading.  So I knew that I was to be their babysitter for the remainder of the year. These eight children were considered dumb by their classmates. It was absolutely no fault of the teacher…It was just kids observations, and conclusions.

Seven were hands on learners, and one had a short term memory problem.  I knew these kids were smart, and could learn. So I just could not give up on helping them by simply babysitting. Perhaps you can imagine how inadequate I felt, and, to be honest, scared. So I did the only thing I knew to do, and that was to pray for guidance. I asked a Higher Power to show me how to help these children. That very night, in a dream, the whole method was presented to me.  So the next school day, I was well prepared.  The children loved it.

Parents often approach me with the same feelings I had.  They are concerned that they are not capable of teaching their children to read. So I ask them, “Can you read?”  When they say, “Yes”, my reply is: “Then you can teach your child to read. With the right tools it is a ton of fun, and much easier than you think.”  We have even provided you free videos so you can make sure you are teaching the phonic sounds correctly. This is import for some children, and the first video explains the most commonly mispronounced sounds….Free Phonic Sounds Videos Here

One little boy (the tallest in the group) was advancing more slowly than the others.  So one child declared, “He is dumb!”  The tallest child lowered his eyes, and his face.  He looked so sad, and devastated. It was heart breaking.   I knew that he lived on a small farm, and could drive a tractor.  So I quickly said, “Oh no, he is not dumb!  Did you know that he can drive a tractor?”  The other kids exclaimed, “He Can?”  “Yes”, I said.  The little boy who thought he was the dumbest of the dumb, was suddenly aroused.  He raised his face, and his blue eyes widened with surprise.   From that day forward, he was considered the hero of the group, and, more importantly, he learned more quickly. In fact all seven of these children began learning faster in other subjects simply because they discovered that they were not dumb after all.  A child’s attitude about themselves can affect their learning ability.

Because there was so much divisiveness in the group, I told them that once they all learned their first 8 sounds, we would all read their first book together.  That day arrived rather quickly, and the kids were so excited (me too).  Every time one of them read a sentence, we all giggled in delight as the reader rapped their arms around themselves in a hug, and giggled with joy.  They had become a team eager to help one-another. 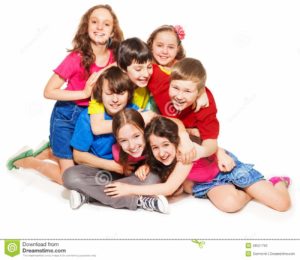 When this first group was able to read at grade level, I went to the teacher, and told her that seven were ready for her to teach reading again.  She did not believe me, so for the rest of the year, I was their only reading teacher.  I did not know it then, but the method was whole brain teaching, which involves as many of the senses as possible. These children didn’t learn with the traditional method, but they easily learned with a hands on method. Thus their self-esteem was better, and their stress dissolved as their excitement increased.  Whole brain teaching helps children learn, and studies show that it even improves the health of the brain.

To the teacher’s surprise, seven of my group passed the end of the year reading test, and were moved on to second grade.  Over the years I repeated that success with children from kindergarten through sixth grade, using that very same method.  Adults began asking me to teach them how to help their children who were struggling with their reading. So my daughter, some home school families, a game designer, and an English college professor, helped me to develop the learning game Ring Around The Phonics. Because of their loving efforts, it is now easy for you to help your child. (Customers can buy this product on our website).

To my surprise other educators began to show me that they were using it to help children learn:

Now You Can Help Your Child learn

Don’t let your child suffer any longer.  You can help your child with Whole Brain Teaching…  Help them learn to read, the easy and fun way, as have many others just like you.

Dr. Stanley explains why this method is so effective (A Vygotskian Perspective).

Note: Studies show that when children discover their talents (that which lights their fire), they will learn previously difficult subjects just to be able to do that which sparks them.  Read more about that on our blog.