Phonics Reading Games That Improve The Health Of The Brain, And One’s Ability To Learn

Studies show that whole brain teaching (example: Ring Around The Phonics)  improves brain health, and the ability to learn.  Yet, many schools are failing children, because  They are not using the Scientific research. Many educators now understand that each person prefers different learning (and teaching) styles.  However learning styles are not written in stone.  One can actually strengthen the less dominant learning (and teaching) styles. Why is this important?

According to the latest brain research: Learning is as natural as breathing. It is possible to either weaken or strengthen a child’s natural desire and ability to learn in different life situations.

Researchers, using brain-imaging technologies, have been able to find the key areas of the brain responsible for each learning style.  They are also able to see the actual brain improvements.

Important Studies On The Frontal Lobe

The frontal lobes play a very important role in regulating our emotional sates and judgments. It is the critical thinker…. the part of the brain that thinks about the consequences of an action. It is not fully developed until the mid 20s. Children who are hindered in developing this part of the brain, can exhibit serious emotional problems.

It was once believed that if you encouraged a person to express their angry emotions, it would “get it out / process it”. However a 15 year study of prisoners commissioned by the government, revealed something very different. If you got an angry prisoner to express his anger, he became angrier. It also revealed that if you educated him, you got an educated criminal….he did not rip you off with a gun anymore, he ripped you of with a computer.

So what did work in that 15 year study?

Developing the frontal lobe worked.  How? It was discovered that even though we all have some degree of false ideas, criminals have more.  For example: criminals (like many children) responded, “Well everyone is doing it”. The response from the psychologist was, “Well it depends on who your friends are.  Mine aren’t doing those things.”  In other words, to develop the critical thinking (frontal lobe). It means replacing a dysfunctional idea, with a functional one (“As A Man Thinketh”).  A healthy frontal lobe helps one to override the execution of automatic behaviors. It overrides potentially destructive illegal or immoral behaviors that are sparked by emotional biases

Use it or lose it.

While it is highly important to provide plenty of opportunity to reach each child through their preferred learning style, it is equally important to exercise the whole brain…use it or lose it. Research shows that by involving more of the brain during the learning process, children remember and retain more of what they learn. According to Dr. Amen, whole brain teaching even improves the health of the brain (use it, or lose it). Help your child with games like Ring Around The Phonics.

Order the game Here using PayPal (be sure to check out the savings on our Value Pack).  You can also order the game on Amazon here. 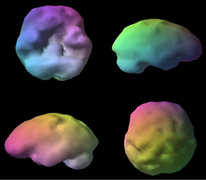 SPECT Scan Of A Healthy Brain

(Source  http://www.amenclinics.com/ )
(To see a picture of the brain showing the different parts, and to learn more about their functions:   http://www.webmd.com/brain/picture-of-the-brain )

The public school system uses mainly the “conventional method” of teaching:  workbooks, lectures, flash cards, reading and multiple choice — sit down a desk type work.  Not only does this not improve the health of the different parts of the brain, but it is a disaster for some children. For example:  Very bright “hands on learners” (38 % of the population) are often labeled as slow learners, problem children, ADHD, or called dumb by their class mates. why? Because the conventional method does not work for them. As a result, they often become convinced that “something is wrong with them“. However give these children a hands experience (like our phonics reading game), and they shine.

So it has become evident that it is important not to just develop parts of the brain, but to develop the whole brain. Studies show that with whole brain teaching (involving as many of the senses as possible), children learn faster, and retain more. Dropout rates decrease by 90%, and the health of the brain is improved.

Emotions simply exist; we don’t learn them in the same way we learn telephone numbers, and we can’t easily change them.  But we should not ignore them.  Children can learn how and when to use rational processes to override their negative emotions, or to hold them in check by developing the frontal lobe area of the brain…learning that there are consequences to one’s actions.  This part of the brain is almost totally ignored in today’s classroom setting.

2. Too much stress can cause learning disabilities

Learning is enhanced by challenge and inhibited by threat.
Emotionally stressful environments (for the educator and the student) are counterproductive because they can reduce children’s ability to learn. http://www.mayoclinic.org/stress/art-20046037

individual – One size does not fit all

Learning is influenced by the natural development of the body and brain.  According to brain research for example, there can be a five-year difference in maturation between any two “average” children.  Gauging achievement on the basis of chronological age is therefore inappropriate, and counterproductive.

4. Make It Experiential (Hands On)

The brain understands and remembers best when facts and skills are embedded in natural spatial memory… we remember what we experience.  This principle can be applied to every subject through games (like Ring Around The Phonics), activities and real life experiences: involving as many of the senses in the learning process as possible.  This is particularly important for the “hands on learner“.  Educators should not exclude lectures and sit down at a desk type work; but they should make them part of a larger experience.

Each brain is unique.  Teaching should be multifaceted in order to attract different interests, and to develop the whole brain. Helping children find their passion is a major part of their future success.

7.  Empower educators to do whatever is in the best interest of each individual child.  One size does not fit all.

Ring Around The Phonics is a reading game that physically involves the children as they learn.  To you, the educator, the child is learning.  But to the child, they are having fun.  They literally beg to play