Suicides, Depression and Violence in Schools

Suicides, depression, and violence are on the increase in our public schools.

Only recently have we began to research the cause, and the findings are very revealing:

We  recently saw  a young boy (only a sophomore) from Corona Del Mar High School in California commit suicide. According to a now viral letter written by the high school principal of a neighboring school, a suicide note left alleging school pressures led to his death. It has given pause to the entire community, including school leaders and parents. How did we get here? We got here when we opened every conversation with our high schoolers about futures, goals, and achievements with the words: “I just want you to succeed (make money).” We should be using the words, “I just want you to develop your individual (God given if you will) talents ….to be who you were meant to be. ”

The school librarian in this link is right on. I worked as a professional tutor in the public school system. Many very bright hands on learners, and analytical thinkers do not learn from the method now mandated in the public school system. The conventional method (workbooks and lectures) don’t work for about 40% of the children.  Those individuals who don’t learn with this method are treated like they are dumb, and feeling shamed, isolated, or worthless. So they were given to me to tutor.

Simply by using hands on learning methods (Whole Brain Teaching like Ring Around The Phonics), they quickly and easily learned.  You should have seen the transformation once they discovered they could learn, and did not need to be drugged. We are overly concerned about “success” (making money in the workforce), and not concerned enough about developing a child’s natural individual talents. I witnessed countless teachers who deeply cared about the children, but their hands were tied by a bureaucracy that cares more about money than they do the individual child.

When Jacob Barnett was 2 years old, he was diagnosed with moderate to severe autism. Doctors told his parents that the boy would likely never talk or read and would probably be forever unable to independently manage basic daily activities like tying his shoe laces.

But they were sorely, extraordinarily mistaken.

Albert Einstein’s story is very similar. Gandhi failed at the career he was educated for, but he united a Nation.

How Did We Get Here?

Increasingly our children are suffering from depression, suicidal tendencies, violence, and anxiety.  Guns or no guns will solve this. We allow the news media and emotions to divide us with gun issues.  Focus on the kids and the issues they are facing, not guns. 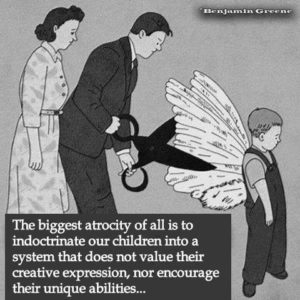