“As a Man Thinketh”

“As A Man Thinketh”

As a little girl I use to tell my Mom, “There was a difference between positive thinking, and sticking your head in the sand”.  She thought that if she acknowledged a problem, she was saying a giving it more power.   So problems weren’t discussed, and  festered until they exploded.

Years later I attended a workshop given by a psychologist on why our prison system was not working…Why it was not rehabilitating  prisoners.  He had been part of a 15 year study on this subject, and said they discovered the following:

The psychologist went on to explain that we all have false ideas. Criminals simply have more of them.  It was discovered that by changing their false (dysfunctional ideas) to functional ones, was the solution to rehabilitation.  For example:  Many criminals would say to him, “Everyone is doing it”.  His reply was, “Depends on who you hang around.  My friends aren’t doing those things.”  The other psychologists were totally enthralled in what he was saying, until he held up the book, As a Man Thinketh: 21st Century Edition (The Wisdom of James Allen)

“This book is exactly what I have been talking about”, said the speaker.

As a youth group leader, a 16 year old girl came to me in tears.  She was pregnant, and said,  “I don’t understand why God is punishing me.  My motives were good.  I love the boy.”  I said to her, “what happens if I stick my finger in the electric socket?”  She replied, “You get shocked.”  “Yes”, I said, “and what happens if an innocent baby sticks their finger in an electric socket?”  She replied, “It gets shocked.” I went on to explain that it was not God punishing me, the baby or her.  It is simply the Law Of Cause And Effect.

Martin Luther King taught blacks to be proud (positive thinking).  Micro Aggression teaches them they are victims .  When you teach someone they are a victim, they become depressed and suicidal, or angry and aggressive.  The latter is easily manipulated into becoming a violent mob.

Janice Harper PhD, in her book “Mobbed”, put it as follows:  Note: she said it begins by labeling someone, and then identifying them as a group rather than as an individual. 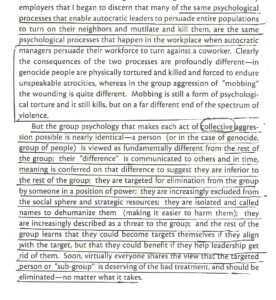 The documentary, “The Mighty Atom”, is a perfect example of positive thinking.  “The Mighty Atom tells the incredible true story of Joseph Greenstein, who at 5’4″ became the world’s strongest man. After nearly dying from tuberculosis as a child in Poland, Greenstein unlocked his mind to achieve impossible feats of strength. Stopping an airplane from taking off with his hair, bending cold rolled steel with his hands, biting through nails –  An amazing tale of human potential, The Mighty Atom will have audiences cheering.”

In Conclusion:  It is our false (dysfunctional) negative ideas that lead us into trouble. Refusing to talk about something negative that is happening is dysfunctional (a negative idea).  It carries negative consequences.

“Ring Around The Phonics” teaches phonics, reading, comprehension, and more