Does Your Child Have A Learning Disability (or misdiagnoses)?

Learning Disabilities are often misdiagnosed even among professionals.  An increasing number of parents are told their children have a learning disability, and need to be held back or medicated. Many parents have concerns about the latter because medications do have side effects. Being held back can also have side effects.  If this describes you and your child, you will want to read this article before making a decision.

There are times when medication can help. But according to Gail Saltz, M.D., drugs  do not teach the behaviors that will help those with ADD / ADHD  function in the world and workplace as they grow older

Moreover, there are numerous cases where children have other conditions that are too often misdiagnosed as a learning disabilities. Symptoms can mimic each other. So parents are wise to be apprehensive. This article provides valuable information and alternative choices that will help you and your child with this important decision.

Note: These are not all the possibilities, nor is it to put the blame on parents or teachers. This article is provided to help parents and teachers make educated decisions on these matters.

In this article, you will find the following:

1. Artisan Personalities (are frequently misdiagnosed as having a learning disability)

The Hands On Learners (Artisan Personality) are often misdiagnosed as having learning disabilities such as ADD or hyperactivity. They are also often described as “immature“.  As a result, they are often held back in school repeatedly.

These children are brilliant until they enter the traditional school environment. They are the first to learn any task that is “hands on” like riding a bike. “Hands on learners” won’t give up until they master such tasks…these children might fall off, get skinned up, but are right back on their project until they succeed.

To learn more about different learning styles, you will want to click HERE.

Scotopic Sensitivity (also known as Irlen Syndrome) is so misunderstood.  Thus, it is often misdiagnosed as a learning disability.  It is a sensitivity to lighting, that causes some children and adults to see things (including letters on paper) as if they were viewing a snowy TV screen, or it can cause them to see inanimate objects moving violently . Some or all of the following symptoms can be noticed in those that have Scotopic Sensitivity:

Note: Some of these children love to draw, but refuse to read. Extreme cases of this condition have been misdiagnosed as Asperger Syndrome.

If you would like to know more about Scotopic Sensitivity, we recommend the following book: Reading by the Colors (Revised)

Note: According to Dr. Aman:

this condition can Lead to headaches, anxiety, depression, problems reading, and depth perception issues. He further states that getting this condition treated and properly diagnosed can make a significant difference in your child’s physical and mental health.

Speaking of one size not fitting all; natural time clocks for learning are different in children. My second grandson was a perfect example:

At the age of five, Koty had learned all of his phonic sounds (from a phonics/reading game…..because he hated flash cards), and could read all of his early reader books. He also enjoyed sounding out large words like “premium” as he and his mother traveled around town playing word games.

But he had no desire to pick up a book and read it. He preferred, instead, to have his mother read to him as she had from the time he was little. Mother was becoming a bit worried, because other kids his age were able to read better than koty. But she had read the book Better Late Than Early: A New Approach to Your Child’s Education

,  by Raymond and Dorothy Moore. As a result, she decided to do as the scientific research suggested.

One day Koty again asked her to read a book for him. He was fascinated by the picture on the cover, and wanted to know what was inside. “Sorry Koty”, she replied, “I just don’t have the time right now”. Koty, anxious to learn what was inside this interesting book, began reading it by himself. He did not put it down until he had finished. Mom even allowed him to read late in bed to nurture his enthusiasm.

Each child is unique: Work with their uniqueness, not against it.

What a miracle! Just as the Moores had predicted, Koty’s enthusiasm was lit. From that day forward he became an avid reader, and advanced several grade levels in a very short period of time…passing his peers.

My little brother, who is now grown, describes himself as having experienced this same situation. He says he learned to read later than most because he simply was not ready. By the way, he is of above average intelligence.

As a child, Albert Einstein was described as a slow learner, and his teacher believed that he would not succeed in any career.

One can learn more about this research at this link:  Different Learning Styles.

4. Hearing Conditions such As “Cookie Bites” are not learning disabilities

This one I experience myself, and it is very often misdiagnosed until late in life (for me it was in my 30‘s). Hearing specialists can test for this condition, and prescribe digital hearing aids to help. Allow me to describe this condition for you.

Children with this condition will be able to hear some sounds very well, and others not so well. For example: I hear Rs, and Gs. However F, and S sound just alike to me, unless I am able to read your lips. These children become very proficient at reading lips, and logically filling in missing sounds and words. As a result parents often never realize that it is an actual hearing loss.

My children say they thought I was ignoring them when they said Mom. The truth was, I did not hear the M…I only heard short vowel o.

Many children with hearing problems often compensate by becoming good listeners, and good at reading faces.

5. Stress And The Toxic Hormone Cortisol cause learning disabilities 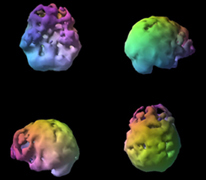 If your child is experiencing stress, pay close attention to this section.

The results of too much Stress causes learning disabilities, and must be addressed.  When we experience stress, it causes an elevated level of the toxic hormone cortisol. Children are less able to deal with stress then are adults.

Studies show that the toxic effect of excessive cortisol has an effect on the brain. The effects can be lasting if stress happens over a long period of time. This hormone was found to be one of the major causes of behavior problems, learning disabilities (ADD, ADHD, dyslexia, hyperactivity, ext), confusion, and impaired thinking in adults, and in children.

Children can become stressed simply because they think something is wrong with them when other children are learning to read faster then they are (see example in #6 below).

Some of the conditions mentioned above , diet (like an allergy or sensitivity to sugar), incorrect disciplining procedures, or excessive testing  can cause stress. Very sensitive children often need different discipline practices than other children might. In large classrooms this is often very hard to accomplish (one size never fits all).

Madeline Lavine PhD is a psychologist with over 30 years experience working with children. In her book, Teach Your Children Well: Parenting for Authentic Success

, she explains that the way we are educating children today is actually causing learning disabilities.

I have worked with many children who falsely believed that something was wrong with them because they were not reading as well as other children. This alone can cause stress for children (elevated cortisol levels). Pronouncing the phonic sounds incorrectly is one of the most common causes of an inability to read. Not all children are hindered by this, but way to many are. So if your child knows their phonic sounds, but is having trouble reading this section is definitely for you.

One of my students was enunciating only the letter w incorrectly. But she believed that something was wrong with her because others were reading better than she was. It became a self fulfilling prophecy. She was stressed every time she was asked to read a book, She could read perfectly while playing our reading game because play takes away stress. However, put a book in front of her, and she couldn’t read the same word that she just read while playing the game.

Each Child is Unique.  Work with that uniqueness, not against it.

So in this child’s case, I used the board game (Ring Around The Phonics) to teach her blending of the phonic sounds (especially words with w in them). Once she became confident that she could read using the game, I presented her with a grade level book. When she struggled with a word in the book, I simply put that word on the red part of the board game (not playing the game, just using the static cling letters, and placing the word anywhere on the board). She confidently read the word placed on the game board (it was a game to her…no stress). Than I had her move back and forth from the game board to the book. I repeated this until she got it correctly in the book. After doing this for a period of time, she lost her fear of books.

She went from failing status to top reading group in her class, and the teacher said it also improved her spelling. The following video explains more so that you can check to see if your child is experiencing this condition:

Here is a letter from her teacher recommending Ring Around The Phonics. 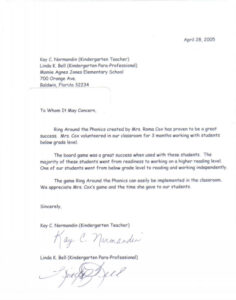 This was another one I personally experienced. I suspect my teacher resorted to teaching me word recognition because she recognized that I was not grasping the phonic sounds. She likely never realized it was due to the “cookie bite” hearing loss, which I describe above (#4).

However not knowing the phonic sounds caused me to read very slowly, and to hate reading. It took me hours to do homework that took other children a much shorter time to accomplish. It was not until I learned phonics that I began to love reading, and my past speed reading classes finally took effect! The following video explains more:

8.  If your child has learning disabilities:

Meet Karen, a tutor, and hear what she has to say about the children she helps with Dyslexia, ADD, ADHD and Aspergers Syndrome:

P.S. Many parents who have children with Autism are finding great results by using the method taught at RDI Connect.

Being informed, and participating in your child’s diagnosis can make a difference in the outcome of his future.  No one cares more than you.

How to help children with learning disabilities